The new modern comments experience will affect files where the first comment was added after your organization has the tenant admin setting enabled. Existing files with comments will not be affected

Modern comments can’t be read by PowerPoint 2019 or older, including subscription and perpetual versions. End users will be notified about unsupported comments in their presentations, with a prompt to open the file in PowerPoint for the web to review the modern comments. A full breakdown of experience by PowerPoint version is available in the tenant admin documentation.

PowerPoint modern comments are available today behind a tenant admin setting which is off by default. 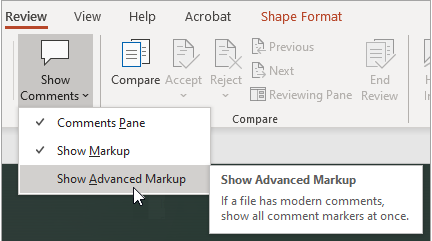 The following steps are recommended to prepare for this change: